I've been trying to get 2 of my best friends to come out on a sketchcrawl with me here in Luxembourg. This Saturday we had our second meeting and this time we were 4!

I think we still need to figure out the logistics of such things, for it took us ages to decide where to stay, until we finally arrived on the Vauban trail (around the ancient fortress walls) and, already a bit tired, just sat on some stairs and started drawing.

I wanted to sketch the view of Abbaye Neumünster from there. It's one of the nicest views of the building.

It was fun to talk to the tourists who were visiting that part. I met a nice Pakistani girl and spoke to some Luxembourgish people.

There was one particular older couple who were commenting in Luxembourgish (thinking I wouldn't understand, I suppose) that I knew how to draw. I thanked them in Luxembourgish and was amused when when the man said, very surprised: "And she's Luxembourgish!"

It started alright, but somewhere along the way it started feeling too forced, so I ended up 1) making big mistakes, and 2) not having fun with this particular sketch anymore. I think that particular day I was not in a mood to draw too precisely. I was not focused enough.

So I started on a whole knew approach, with my new Hiro fountain pen, which I discovered at the BCN Symposium (it seemed like all the Asian sketchers had one) and absolutely love. You can't bee too precise with it and it just glides on the page.

This house is one of my favourite on the Vauban trail. I love that its windows are all placed so "randomly". It makes if fun and, along with its pink colour (though not as pink as on my sketch), very cute.

My approach was to draw it as if it was a monster. It's an approach that was taught during the symposium as well. Though I didn't attend that particular workshop and don't actually know what it was precisely about, this expression just stuck with me.

I had a lot of fun drawing like that, without taking too much care of detail and perspective, and I think it shows on the page.


After my second sketch, not knowing what else to sketch and seeing that my companions were still busy with their work, I decided to just sketch them. Tessy and Didier here, I somehow messed up a bit (Didier looks much older than he is and I shouldn't have fiddled with Tessy's nose so much, lol), so we had a lot of laughs thanks to that.

Annick recently got engaged and asked me to draw her engagement ring. So I did this very quick sketch for her.


And, last of my day's production, Annick's idea: sketching our feet and her cigarette stubs.

Finally, here's the commemorative photo of the day: I love to see my friends having fun sketching! 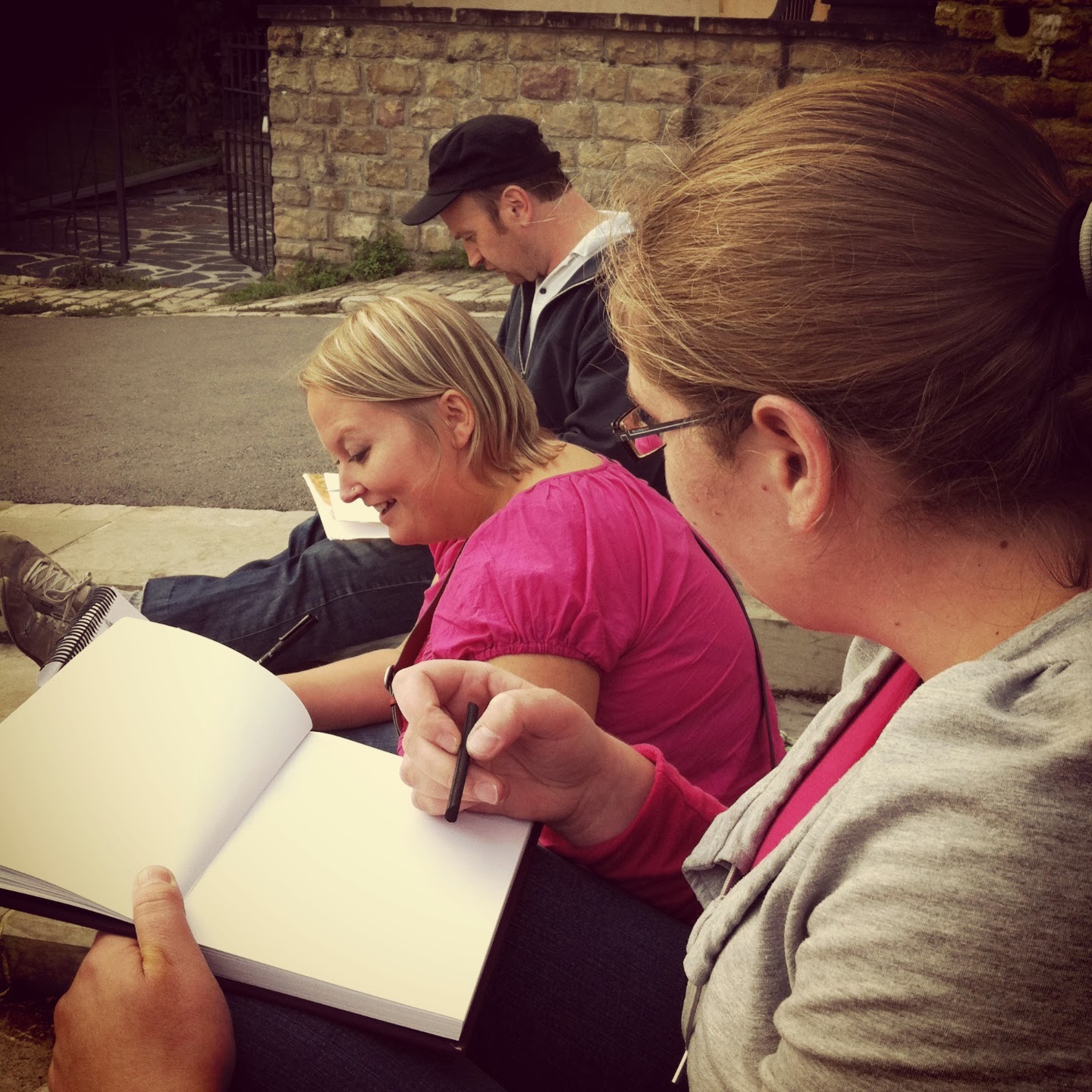