Workshop in Newbury - round 2

The second round of the Newbury workshops started with Inma Serrano again. We continued focusing on composition, but this time the exercise was reversed: Inma gave each of us
a diagram of the composition she wanted us to use and we had to make our sketch according to that plan.

My first one was fairly easy to use,specially since ... 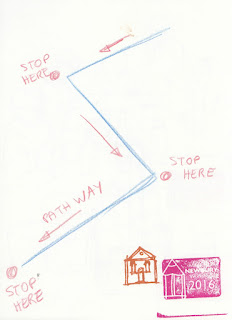 ... my fellow sketchers were seated in a very convenient way that fit the diagram perfectly. 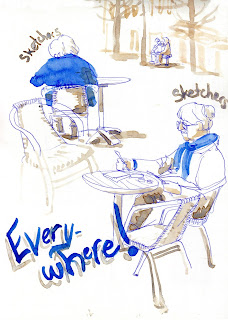 The second diagram I received was a bit trickier, and I don't think I managed to do the exercise as well, but hey, that's how you improve. 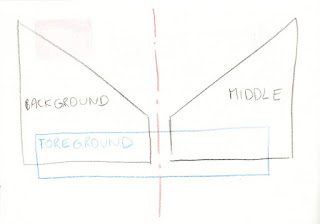 I have to say this was one of the best exercises on composition I have had so far. Usually you study composition by analyzing existing works, but the reverse is much more challenging and really makes you think about your work beforehand. 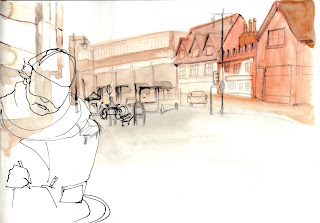 The second round with Isabel Carmona was again focused on watercolour, but not excusively. We were asked to sketch the same view twice, using watercolour in different ways and combined with another medium.

For the first one, I used watercolour in layers and only added a line of ballpoint pen in the foreground later (it seems that I cannot do without line altogether). 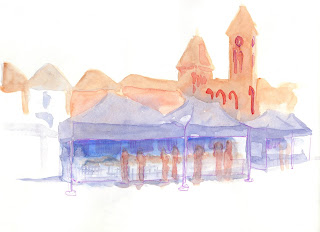 For the second sketch, I used mainly line work and and added a bit of watercolour to emphasize a few places. 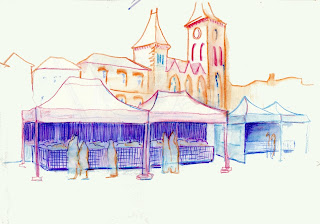 For the very last workshop with Swasky we went to Marks and Spencer, where he asked us to tell a story of what was going on inside and outside of the building...

... and then we had a portrait exchange. I sketched Brenda and Swasky himself. I discovered that I am much more comfortable making a portrait of someone who is not looking at me directly. Less pressure, I suppose. 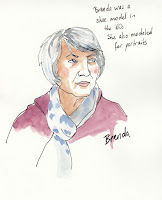 All in all, I enjoyed the Newbury workshops immensely. Not only were the teachers very knowledgeable, but you could also feel how their approaches complemented each other in the end.

It was a very enriching experience and I felt like I learned a lot to be used in future sketches.
Posted by Unknown at 11:41:00 am