There is so much to do and so much to see in London! On the first few days we walked around to so many places that I don't actually remember in what order...

One would think that when using only one sketchbook, the problem of chronological order would be solved, but I hopped around a bit on this one, so here are my sketches in the order I think they were made.

Stephanie was very keen on sketching St Pancras station and I could easily understand why. The building is gorgeous. Made of red brick, it looks like a castle and was a bit too daunting for me - I was a bit tired of imposing buildings.

Fortunately, the station is as interesting inside as it is outside and I was immediately attracted by this statue called The Meeting Place by Paul Day. The frieze at the base of the statue caught my eye in particular. It features images from the history of the Tube and train: soldiers departing for war, people queuing, even a couple embracing while one of them keeps looking at her phone (very contemporary).

I heard the piece did not get good reviews. Not brainy enough probably. Call me cheesy or naïve, but I liked it.

London being such a big and busy city, I sometimes felt it difficult to find a quiet place. As a tourist you just don't know where to go. Fortunately, Anne knows some good spots and she took me to Berkeley square, where I practiced painting foliage and finally added the iconic red phone booths to my sketchbook. I couldn't leave London without at least one of these lovely red boxes. 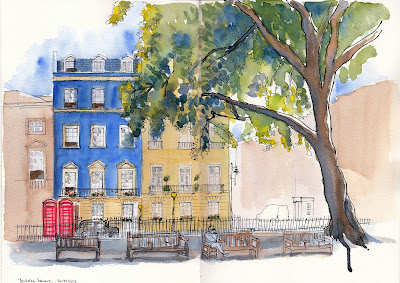 Covent Garden, another one of those names you hear over and over again but can't really picture if you haven't been there before, is a bustling place with markets and lots of visitors.

While I was sketching, a German guy asked me if I could quickly sketch a reproduction of Van Gogh's Sunflowers. He was participating in a friendly competition over the city and one of the tasks was to copy the painting. He assured me he was no good at drawing at all, so I helped him cheat.

At some point, Anne took me to the Court of Justice, another impressive building. We sat on a bench in front of it, and in front of some activists from Anonymous who were protesting about something.  I find it very interesting to see something that I only know from TV or the internet. It makes it much more real.

In search for another quiet corner, we stopped near Fleet street to sketch these cute buildings. The area seemed to be full of solicitor's offices, there were smart-looking people coming and going.

The whole afternoon I had songs from Marry Poppins stuck in my head.
Posted by Unknown at 3:00:00 pm