A leisurly stroll around Walfer

I live in a municipality, or commune, called Walferdange. It is adjacent to the capital and boasts its own small shopping centre, spa and cultural centre with sports fields and even part of the university of Luxembourg.

Before the freezing temperatures started, I decided to go on a solitary sketchcrawl to explore Walferdange, or Walfer as the locals call it, armed with a fountain pen filled with ink and a small sketchbook.

My stroll first took me to the local train station, or rather to the Walfer Kulturschapp with the train station in the background.This place looks almost like an abandoned shack and not so much like a place for culture, which is partly why I like it. I love when buildings are re-purposed, specially if it is for culture.


Next stop, the Prince Henri cultural centre with its football (or should I say soccer?) field. As chance would have it, a football game was taking place that afternoon. I wasn't curious enough to find out which teams were playing, but it gave me the opportunity to see the place in a more lively way.The teams were young, the players all teenagers, and the spectators probably mainly family and friends of the players.

Walfer has several beautiful mansions and other interesting older houses, a real treat to sketch. I chose to try my hand at this one, mainly because it was on my way home, but there are several other interesting ones, which I will definitely sketch some other time. 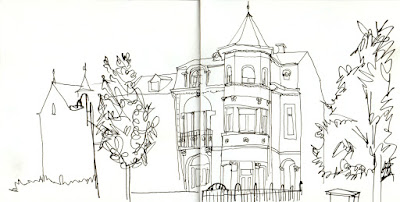 I will have to organize a sketchcrawl around the commune sometime once the weather gets better.