Where is the bridge?!

We have had a couple of really sunny weeks lately, enticing me to take sketchbook, pen and watercolours out and explore the city. The reopening of the Adolphe bridge was the perfect occasion. It is one of my favourite places in the city and boasts one of the prettiest views over the "ville haute".

The bridge, also called Nei Bréck (new bridge) by the locals, is one of the most iconic monuments in the city and had been closed off for renovations and improvements for the future tram to run through.

I was decidedly a bit naïve in my eagerness to sketch the bridge, for when I arrived it was still covered by the scaffolding... No sketching my favourite bridge today! So instead I sat down in the middle of the temporary bridge next to it, looking back at the building of the state bank, another iconic building. It is where the original headquarters of the European Coal and Steel Community were, the forebearer of the European Union.

This view, with traces of the working site soon to be removed gave me a sense of documenting another, far smaller, moment in history. 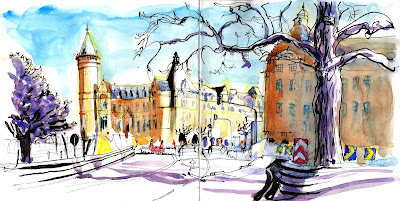 However, the day was decidedly windy and I was soon covered in gravel and sand, so I stubbornly finished my sketch as fast as I could and moved on to a more secluded location between the trees, from where I could make a quick sketch of the tower. 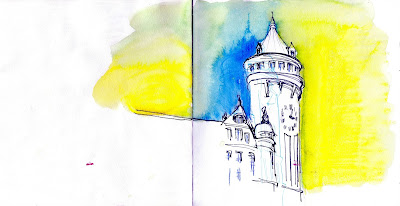