A few months ago I had the opportunity to attend a concert rehearsal at the Philharmonie. The philharmonic hall elaborated by Christian de Portzamparc is one of my favourite concert venues in Luxembourg. While I unfortunately did not have time to sketch the beautiful building during the guided tour we had, I was able to get a couple of sketches done during the rehearsal itself.

Besides a couple of other guided tour groups, there was one man sitting in front of me who seemed to be following the music along on a music score. Although I can read notes, I would be stumped if I had to read the score of a whole orchestra! I wondered if he was a music critic. 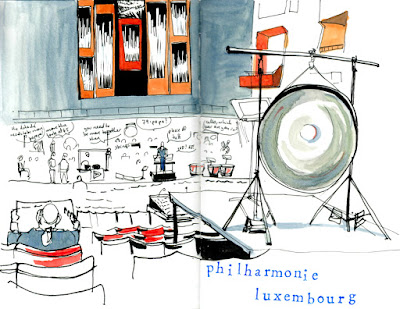 I don't remember the name of the piece, but it was a more modern composition, difficult to follow. The full experience involved the use of instruments among the audience, which allowed me to see one of them up close.

We were sitting too far from the stage for me to sketch the musicians, but I was able to catch the conductor's dramatic poses as well as some of his (to me) cryptic comments to the orchestra. 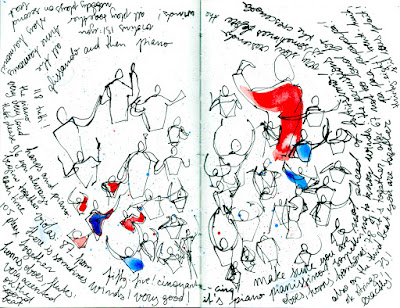 I can't say that it was a piece I would have paid money to listen to, it was not harmonious enough, but it was indeed a very interesting rehearsal to witness.
Posted by Unknown at 9:00:00 am