Rainy afternoon at the Rotondes

At the last sketchcrawl with the USK Luxembourg, we met at the Rotondes in Bonnevoie. This location was first used keeping steam locomotives and their maintenance. Later it worked as a repair shop for buses.

Toward the end of the 20th century, they were added to the list of classified monuments and renovated to be used as exhibition spaces. Today, they host concerts, exhibitions, a pub and a variety of cultural events.

We met in the afternoon as usual and were joined by Jonathan, a fellow urban sketcher from the UK who was visiting the city that weekend. Unfortunately it had to be one of the wettest days of the year so far. We jokingly commented to Jonathan that it was probably not a big change from the weather at home.

Our group split between those who wanted to stay in dry space and those crazy enough to try to sketch on the roofed overpass between the Rotondes and the Luxembourg train station. I joined the second group. 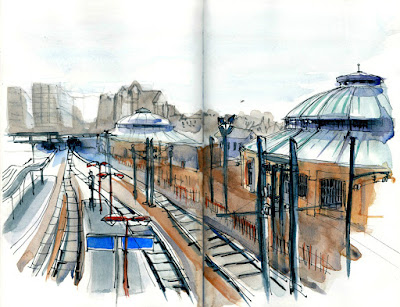 It would have been a perfect location despite the rain, had it not been for the strong wind pushing water through some of the openings in the overpass. In spite of those conditions, I was pretty proud to manage a decent sketch.

However, after a while we all had to concede to the weather and headed inside to the Rotonde's pub, the Buvette, for a cosy session of hot drinks and sketching. 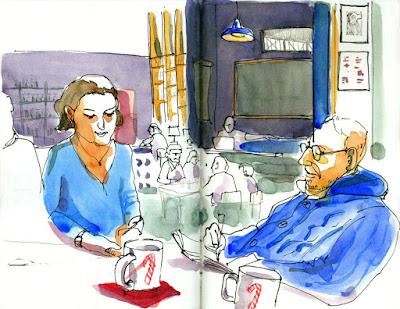