Our regional group of Urban Sketchers has been very busy this past month, preparing for our first international sketchcrawl taking place on 29th and 30th April.

This last weekend we hosted around 100 sketchers, both locals and from neighbouring countries. We even had a guest who came all the way from Norway to participate in our event!

Saturday I had to find a balance between looking out for people, a short interview for the local news network, answering phone calls and sketching throughout the weekend. I have to admit that I did a lot of running around that day, including a quick stop at the Duck Race that was taking place in the Patrusse valley with a few sketchers. 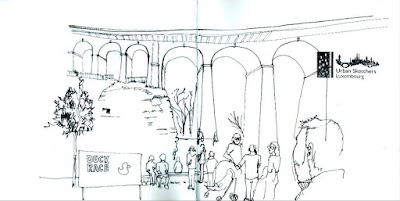 Many families had gathered to see 16,000 plastic ducks being dumped in the water and "race" for charity. Unfortunately there was a shortage of water, so it was less spectacular than I expected, and there were so many people that I didn't get to see much racing. I was told the view from on top of the bridge was better though, so I might try that instead next year. 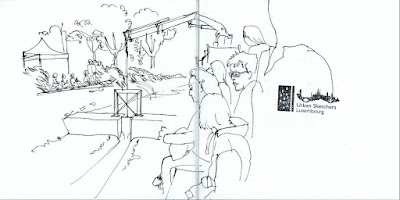 Coming back up for air, in a way, I settled with some of my fellow sketchers near the Musée Nationale d'Histoire et d'Art. Much more relaxing after the big crowds around the Duck Race. 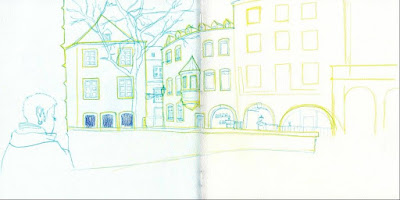 In the evening we headed for Rives de Clausen, where we would take the traditional group photo and have dinner. 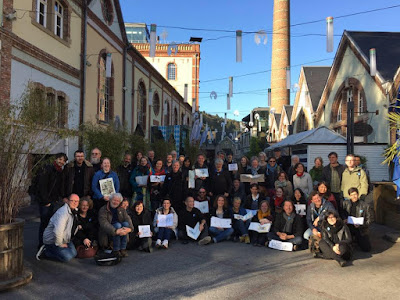 The whole day couldn't have been better. Between the wonderful weather and the amazing participants, I had a lot of fun and looked forward to spending a lovely Sunday in good company again.
Posted by Unknown at 5:00:00 pm