In a few hours, this year will be over. Already!

It's been very eventful and positive for me. I haven't seen time pass.


Have a glood slide into the new year, as we say around here. Gudde Rutsch am neie Joer!
Posted by Unknown at 11:27:00 am 4 comments:

Email ThisBlogThis!Share to TwitterShare to FacebookShare to Pinterest
Labels: people, portraits without mercy

This jolly Santa was in the newspaper today.

When I saw him I could just imagine his booming laughter :)

Email ThisBlogThis!Share to TwitterShare to FacebookShare to Pinterest
Labels: people, this and that

A study on a gear shift

A few days ago we went on a trip to Strasbourg to enjoy the Christmas market.

My father was driving and since it is a two hour trip I took the opportunity to sketch something to pass the time.

The result is slightly wobbly because of the driving, but I'm quite satisfied with it.

Email ThisBlogThis!Share to TwitterShare to FacebookShare to Pinterest
Labels: this and that

Here is my second attempt at mail art. This time the exchange was organized by Urban Sketchers Belgium.

I took some inspiration from the beautiful letter I received in the previous exchange.

The subject was "Decemberrrrr", so I was looking for something that would fit.

Luckily the temperature yesterday was mild and I was able to sketch a small part of the Christmas market on the Place de la Constitution. I added the colour later.

The whole time there were tourists waiting for a bus ; it was funny to have a big group of what I assume were Chinese people around me, taking pictures of the market and not really curious about what I was doing.

This is what the envelope looks like once it's closed. 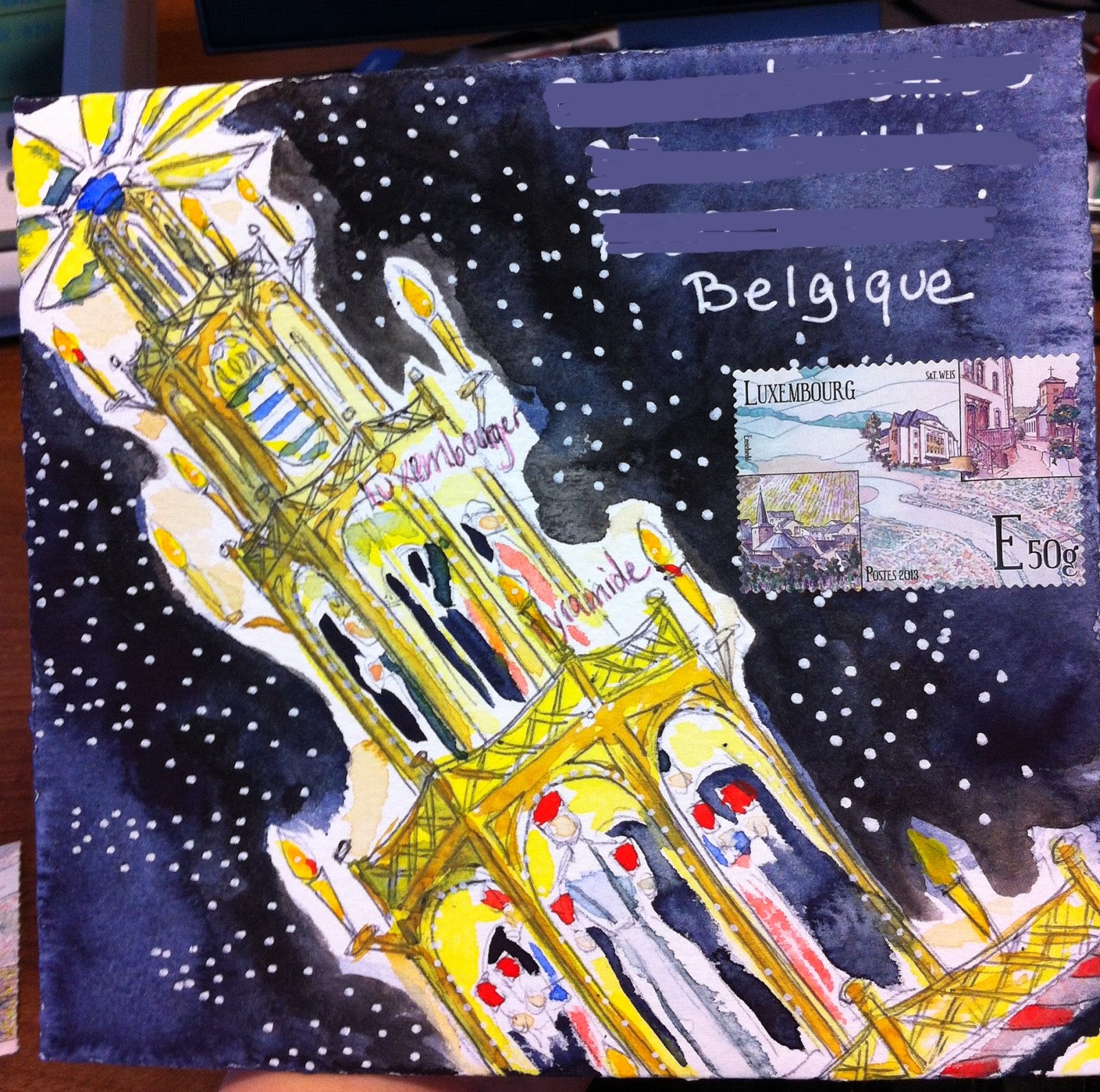 And this is what it looked like before I folded it. 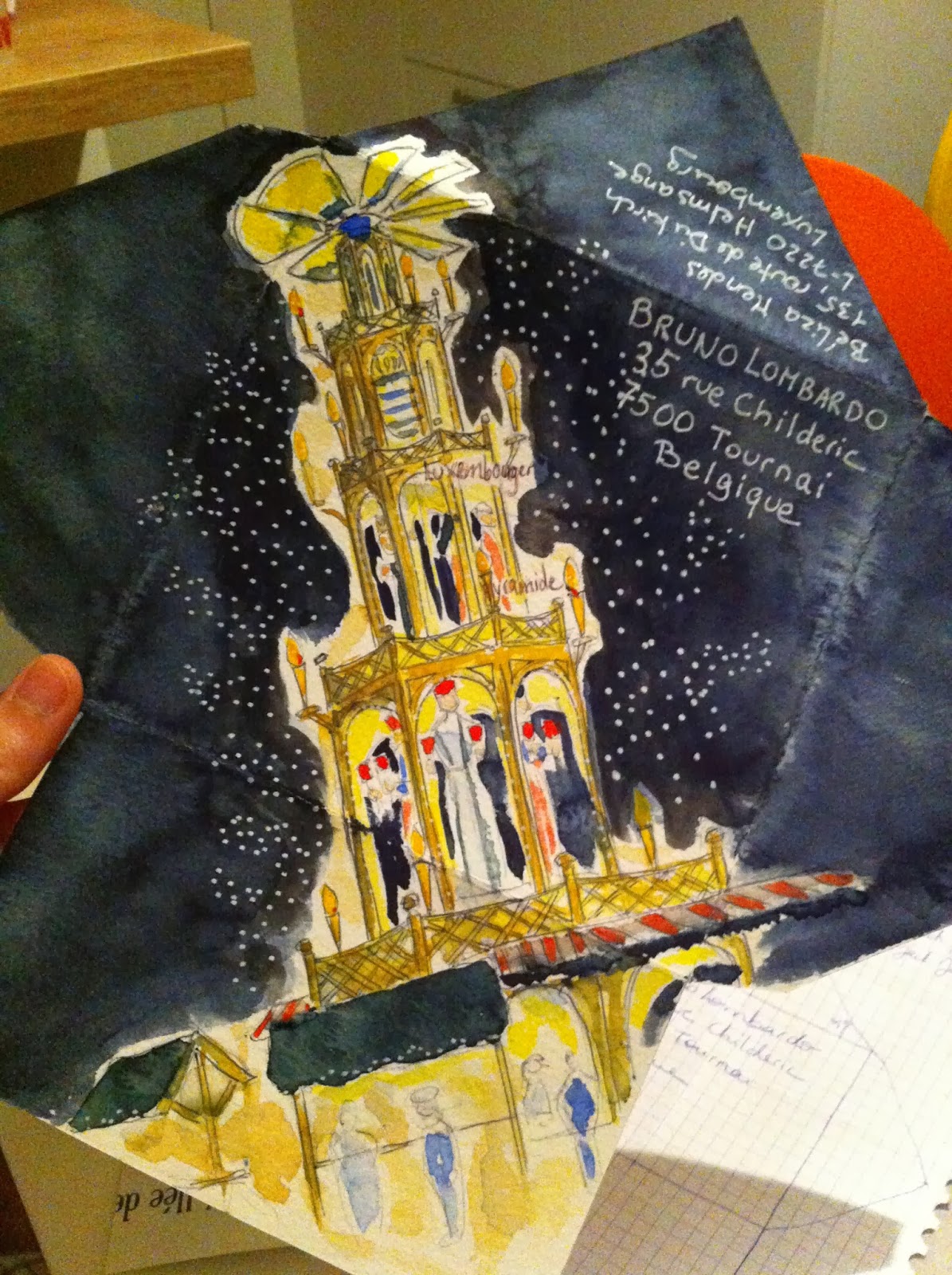 UPDATE: Here are the works of all the participants on the blog of Atelier "Carnet à Spirale".
Posted by Unknown at 11:07:00 am 2 comments:

People on the bus

Even when they're not doing anything in particular, they are so absorbed in their thoughts that I can study them at leasure.

I tend to have more difficulties drawing men than women. It might not look like it, but this man is no exception. Although he was not a bad-looking guy at all, I made him much more handsome than he actually was.
I was attracted to this girl because it looked like she was completely out of it, looking at the ceiling and smiling as if she was seeing someone she knew. I even wondered if she wasn't on drugs...

I liked this woman's hair for some reason.

This lady looked so warm in her winter clothes and was delightfully absorbed in her book. She didn't move at all.

How could I resist this nose? Just beautiful!
I was sitting face to face with a teenager, completely engrossed in a game. The movement of his hands was fascinating.

Of all the people inside a bus, there are always quite a few on the phone. I liked this woman's posture. Plus the fact that her neighbour was on the phone as well. The rest was a matter of being stuck in a traffic jam.

The forum of contemporary art, Casino Luxembourg, organises a sort of round table on various subjects which they call Stamminee.

Stamminee is a Luxembourgish word meaning 'table of regulars' (in a pub), and by extension the regulars themselves.

This month's Stamminee was on the subject of nation branding and on Luxembourg's image in particular.

The guests were people active in the art and culture scene, business promotion, nation branding, as well as civil servants from the Ministry of Culture and Ministry of the Economy.

I actually went to provide moral support to a friend of mine, one of the representatives of the business aspect of the subject. I had to smile when she said she was not the Antichrist when she introduced herself to a crowd mainly composed of people who believe that culture and business cannot work together.


The main ideas that I found interesting during the exchange were:

The fact that Luxembourgish people are not proud of their culture and history, so how can they convey an image of Luxembourg other than that of a tax haven?

There is even a sense of shame for what Luxembourg is and a defensive stance ('We are not just a tax haven!'), instead of a more positive proposal to describe the country.

It is important to work on the country's image at home first, so it can improve abroad.

Questions like Who are we? and What do we want? must be answered before any efficient nation branding strategy can be developed.

On a more positive ending, it was noted that people who have been to Luxembourg usually like it, find the population friendly and leave with a very different impression of the country.
Posted by Unknown at 10:47:00 am No comments:

This month's Virtual Paintout location was both wonderful and terrible, for how can one choose only one place to draw in Venice?

I remember last time I was there I couldn't put my camera down ; it's such an incredibly photogenic city.

So I decided to settle on a view of Campo Santa Margherita, the place I last saw a very good friend of mine.

It was a challenging image to draw from, for it is bustling with people, and I'm not really satisfied with the result: 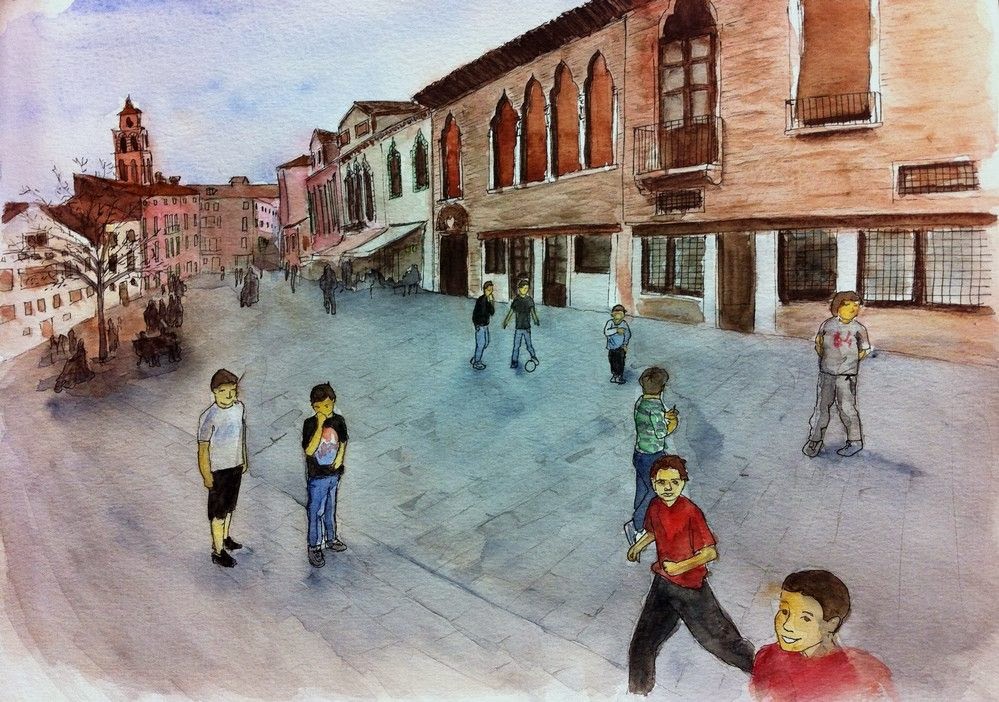 What attracted me to this particular place was the children playing and running around, plus the beautiful old buildings all around.

The result, however, is very stiff and there are too many distractions, so after careful consiferation I decided to crop it before sending out my submission:

I think it looks a bit better this way.

I got a bit of feedback from more experienced sketchers and think that I definitely learned from this one.
Posted by Unknown at 1:25:00 pm No comments:

I recently stumbled upon Sylvie Bargain's blog where I found out that she was organising a mail art exchange.

I had never heard of mail art before and it sounded like fun, so I decided to join.

Plus I love to get mail!

Here is my contribution. It should have arrived at its destination in France by now. 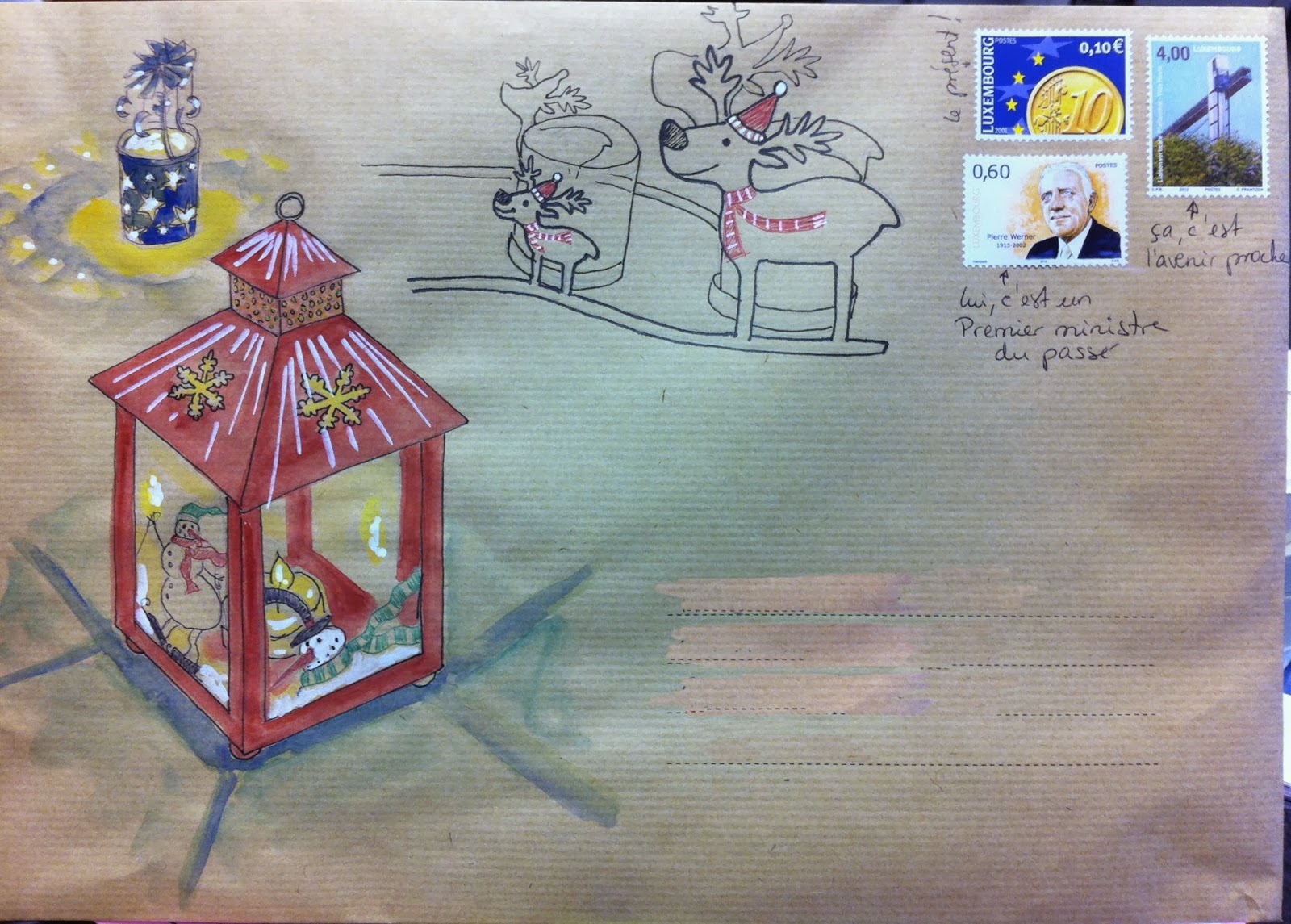 Quite predictably, I decided on a Christmas themed sketch. I was hoping to sketch outside, but it's really been too cold and after a few less than inspiring attempts, I figured it would be best to sketch some Christmas lights I have at home.


I inserted a small invitation on the back of the envelope. 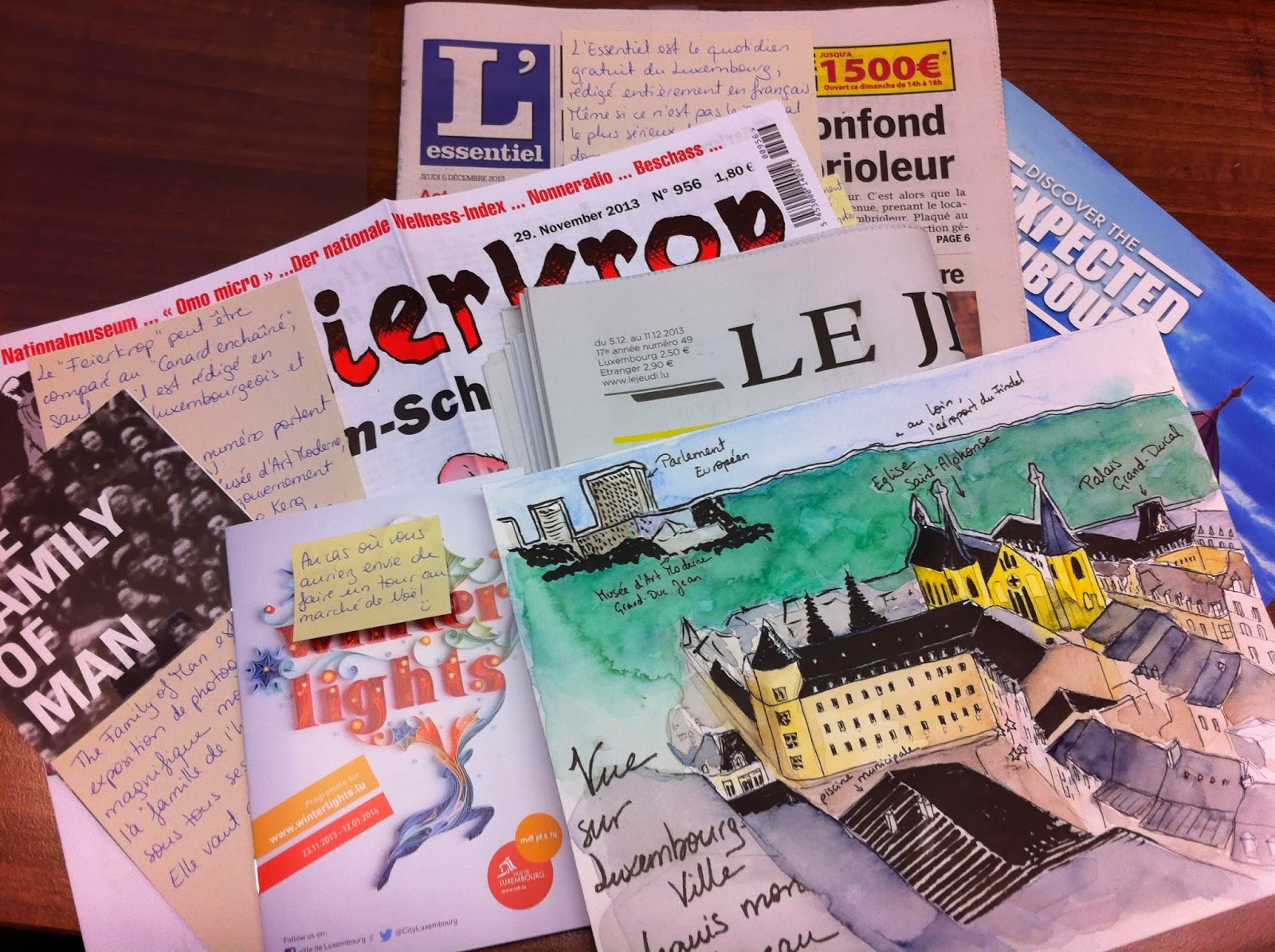 And a glimpse of Luxembourg inside: the view from my office, some Luxembourgish newspapers and a couple of brochures. I'm hoping to attract some visitors, ho ho ho!

This has indeed been fun and I'm looking forward to getting mine!

Next mail art exchange will be at the end of December, this time organised by Urban Sketchers Belgium.

UPDATE: Here is the beautiful mail art I received from Sandy from France. I think I'll take inspiration from it for future exchanges.

I think she was Russian...

The first thing that attracted me to this person was the huge fuzzy pom-pom attached to her hat.


The second thing was her long orange-brown hair.

And then there were her long mascara-laden eye-lashes.

That's probably why she doesn't look like a teenage girl in my sketch anymore.

This is a post for Portraits without mercy. Check out that fun blog!
Posted by Unknown at 8:43:00 am No comments:

Email ThisBlogThis!Share to TwitterShare to FacebookShare to Pinterest
Labels: in transportation, people, portraits without mercy

For the fourth year running, the Cinémathèque in Luxembourg organises a crash course on cinema in collaboration with the University.

Every month, a different specialist holds a conference, which is then followed by a movie relevant to the content of the speach.

This year the theme is about the different styles in movie making.

Last week it was Hervé Aubron, a film critic and professor of the Université Paris III, who came to talk to us about Baroque.

These sessions are always full and I always have to be there at least half an hour early, so I get plenty of time to sketch.

I have to admit that this doesn't really look like Mr Aubron, but I got to try out a different way of sketching and taking notes.

Looking forward to the next month's session on Naturalism!