People gazing at the Christmas market

For the last sketchcrawl of the year, the Urban Sketchers Luxembourg decided to aim for the Christmas market in the capital.

This time around we were quite the crowd, with 10 people spreading around the place to sketch the little houses, the people, the surrounding buildings.

I started with the best intentions of capturing a scene of the whole market or at least a portion of it, but somehow only managed to focus on a funny little statue on top of one of the stalls.

The drunk Santa was just irresistible. 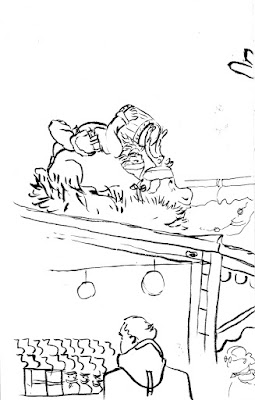 Luckily, the weather was quite mild for the season and there was a big crowd, which allowed me to sketch my favourite subject: people.

People being people, though, I did not have many cooperative models and had to be as fast as possible, so I ended up mainly with a collection of hastily jotted squiggles. 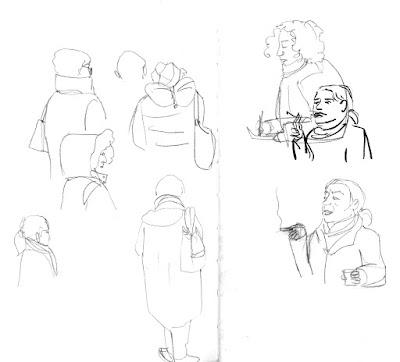 It's ok, though, for a collection of squiggles always looks better than one squiggle alone :D 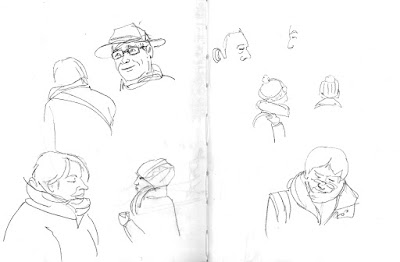 After a while it started feeling cold, so we headed to one of our favourite cafés, the Kaale Kaffi.

Everyone was pretty much at the Christmas market, so we were able to sit the whole group at the big table.

Nothing like sipping on a ginger lemon tea while drawing with sketching buddies to finish a lovely afternoon.
Posted by Unknown at 11:00:00 am No comments:

Last Saturday I met with other sketchers for a sketchcrawl organised by LUCA at La Buvette, the pub at Rotondes in Bonnevoie.

The Rotondes used to be buildings where trains were repaired and stored. They were repurposed a few years ago and have now become this trendy place where various cultural events take place, such as exhibitions, concerts, plays, etc.

Unlike so many places in Luxembourg it is not overly clean and organised. I love the occasional messiness of the place.

Undeterred by the cold, we started out on the outside, where the food truck is. I couldn't resist sketching the trailer and the many seemingly randomly placed cables with their colourful lightbulbs. I'll have to add some colour to this sketch sometime.

I have to say we were quite the troopers out there. The day was pleasant but pretty cold. At some point my hands turned a shade of purple. It got so bad that I didn't even feel the heat emanating from the glass of mulled wine I was holding.

Luckily, the inside of the Rotondes is just as interesting as the outside, and we warmed ourselves up at La Buvette. The servers are very friendly and we enjoyed the cosy afternoon atmosphere.

I'll have to go back when the weather is nicer. These round shaped buildings are so interesting, they deserve more attention.
Posted by Unknown at 11:00:00 am No comments: 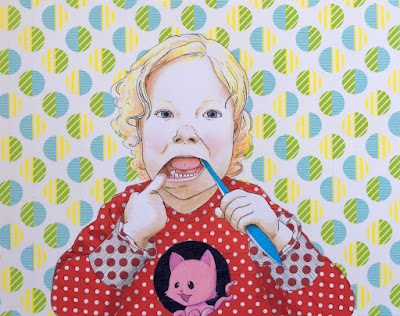 Unfortunately, I didn't have a chance to scan the portrait properly before sending it, so the colours are slightly off on this image, but it gives a pretty good idea of the final result.
Posted by Unknown at 11:00:00 am No comments: