A sketcher in the Urban Sketchers Flickr group recently organised a worldwide sketching exchange with the theme "small adventures".

Participants should make three sketches that show some kind of adventure, e.g. the path leading to a specific place.

I haven't had much time to work on this recently, so I took advantage of the time spent on a sketchcrawl yesterday with the Luxembourg Sketchers to get to it.

We went to one of Luxembourg's most popular parcs to sketch the people around us.

Inspiration took its sweet time coming, so I decided to make a three part view of the parc.

Unfortunately, sketching nature is not so my thing, and I wasn't completely satisfied with my three sketches.

Luckily, a cute teckel caught my attention and I decided to make this about his "adventure".

I later stitched the sketches together to make an accordeon booklet and that was it!

Here is the resulting panoramic view (I finally learned to paste several images together).


And here are the three separate sketches. 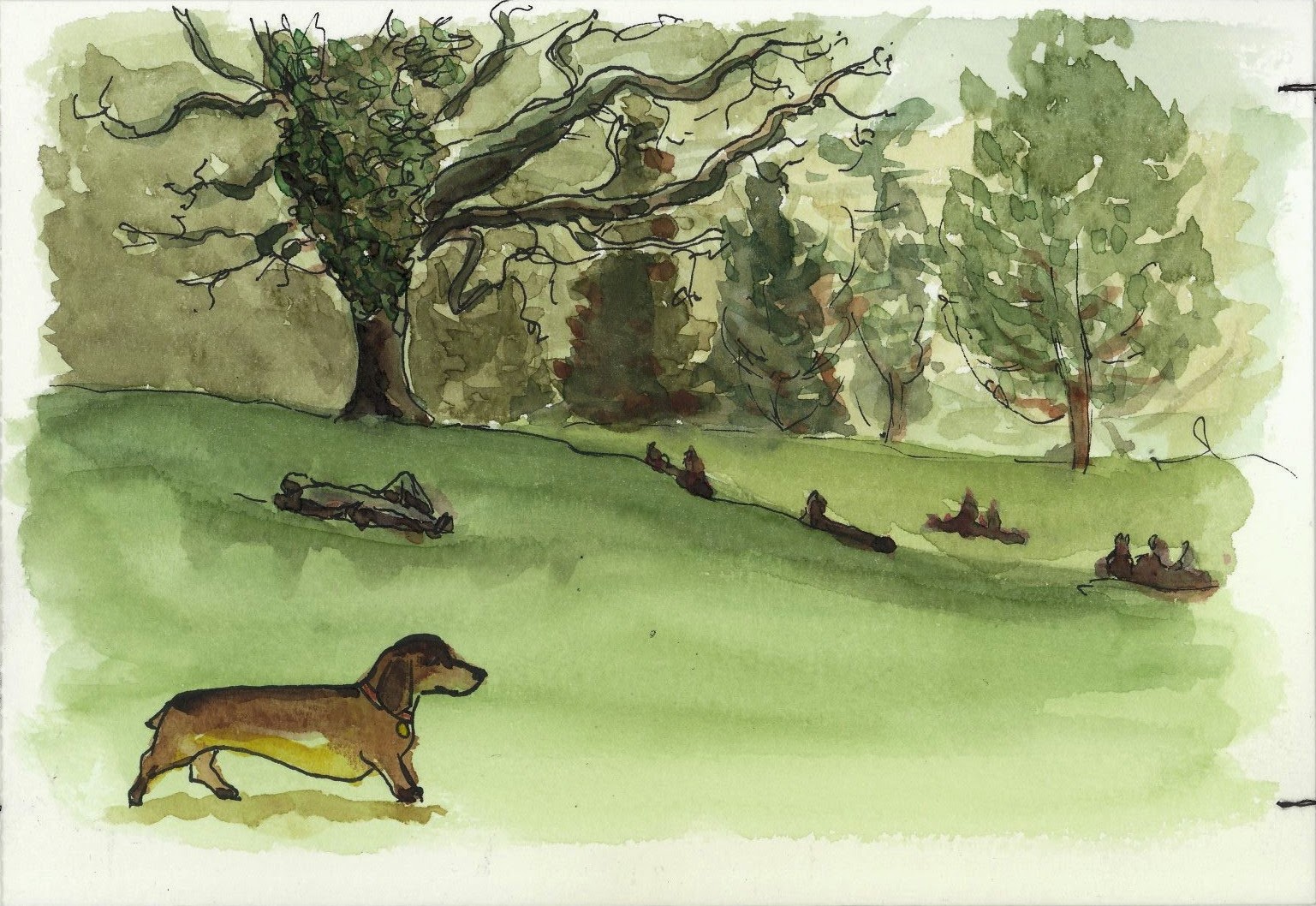 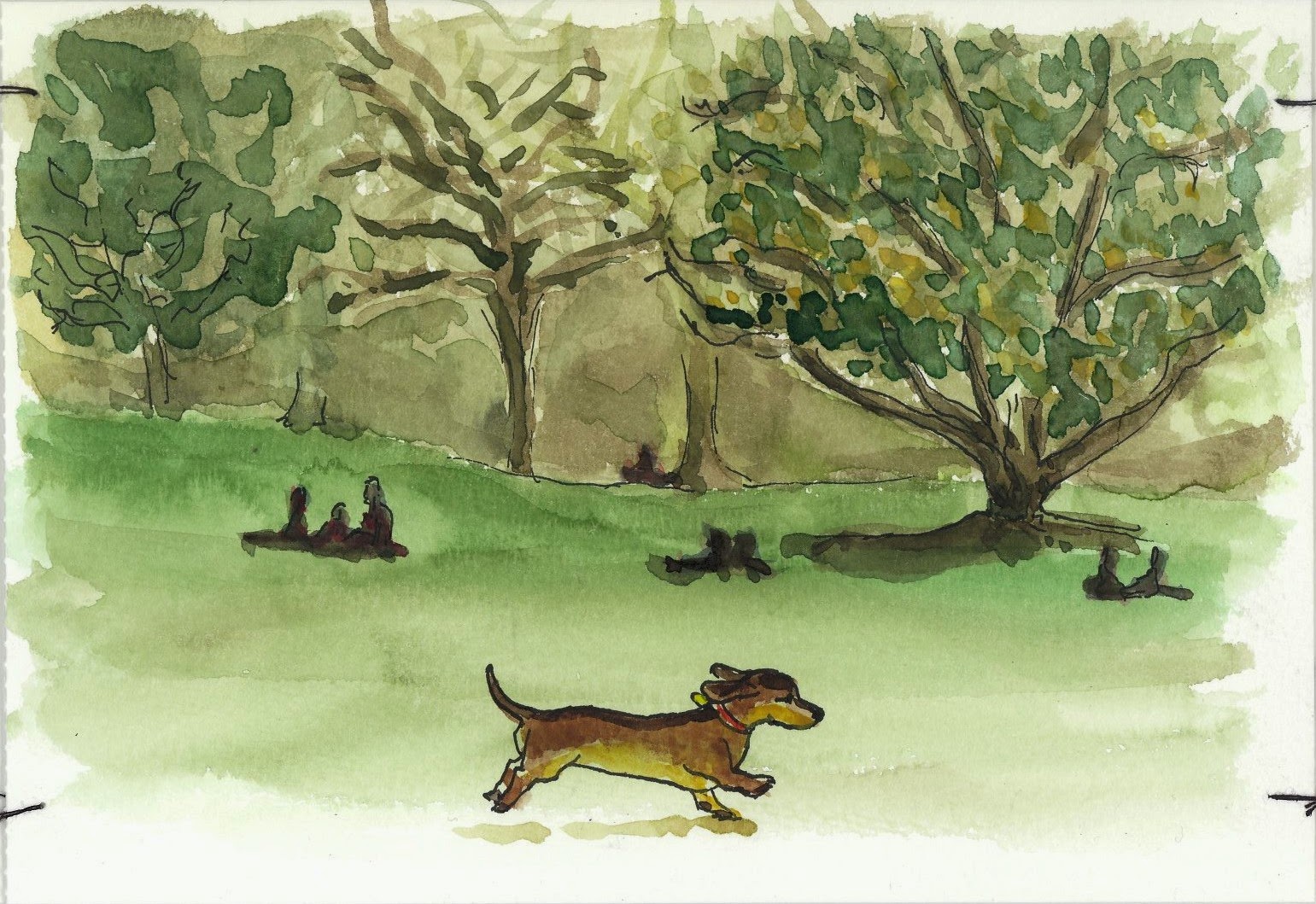 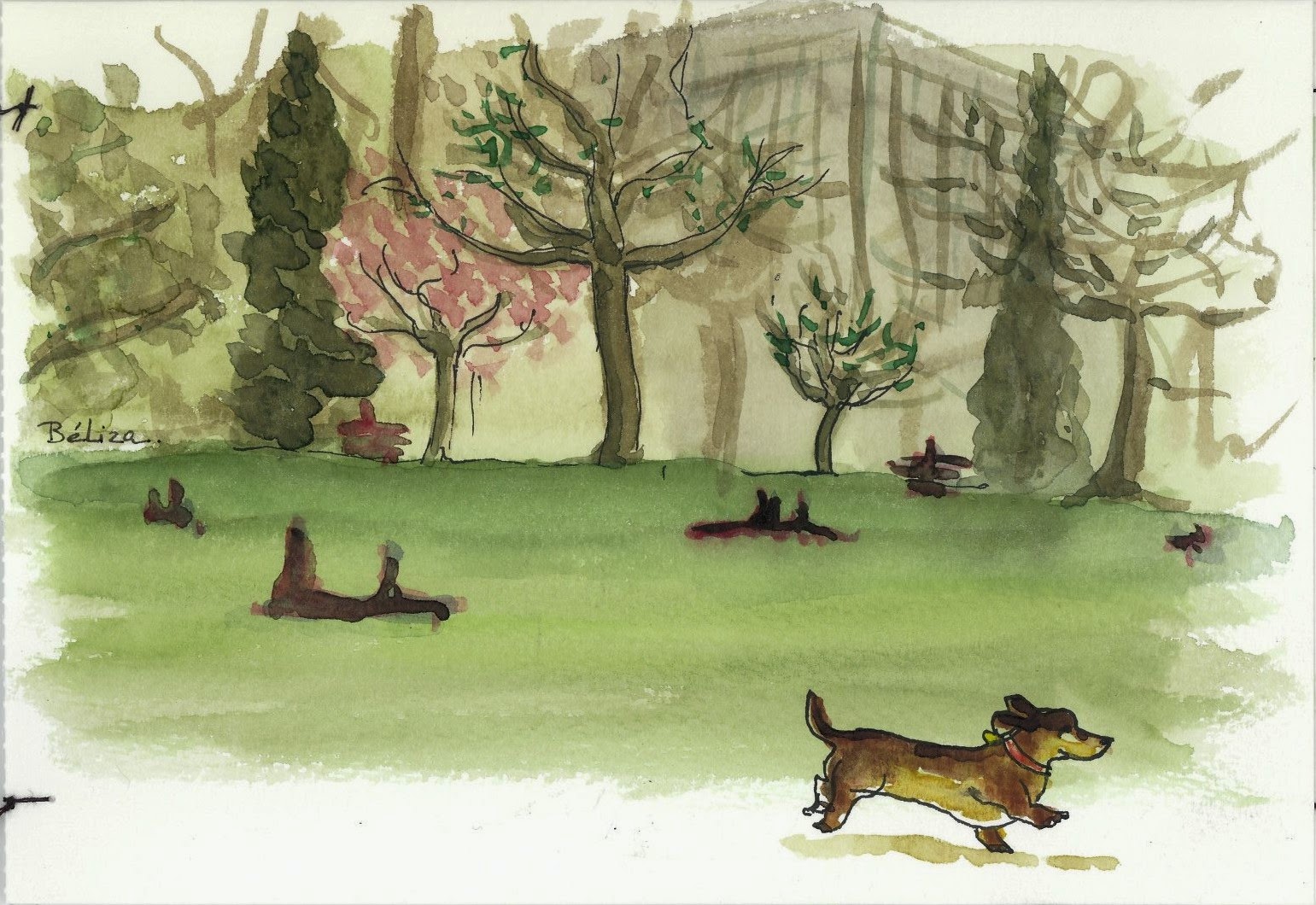 You can find the discussion thread with all the submissions on Flickr.

A piece of Italy

Agnes den Hartogh, one of the members of Sketching Workshop, is preparing a community project for an exhibition in Palazzo Moretti, Pozzuolo, Italy.

Her idea was to take 32 photos of streetview and let different artists interpret them into individual art pieces.

She will then put the panoramic streetview back together for the exhibition.

In this context, she asked if members of the Sketching Workshop group were interested in participating to this project and I got a piece of street as a result.

Here is the reference photo she sent me. 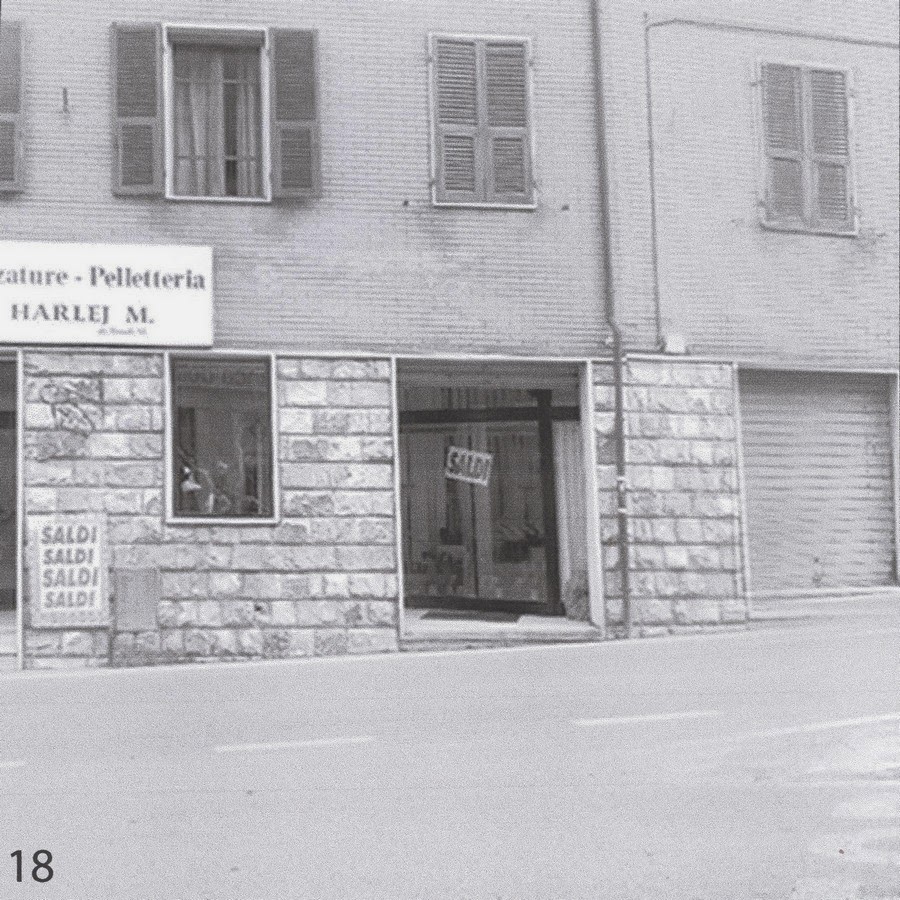 And here is my interpretation. 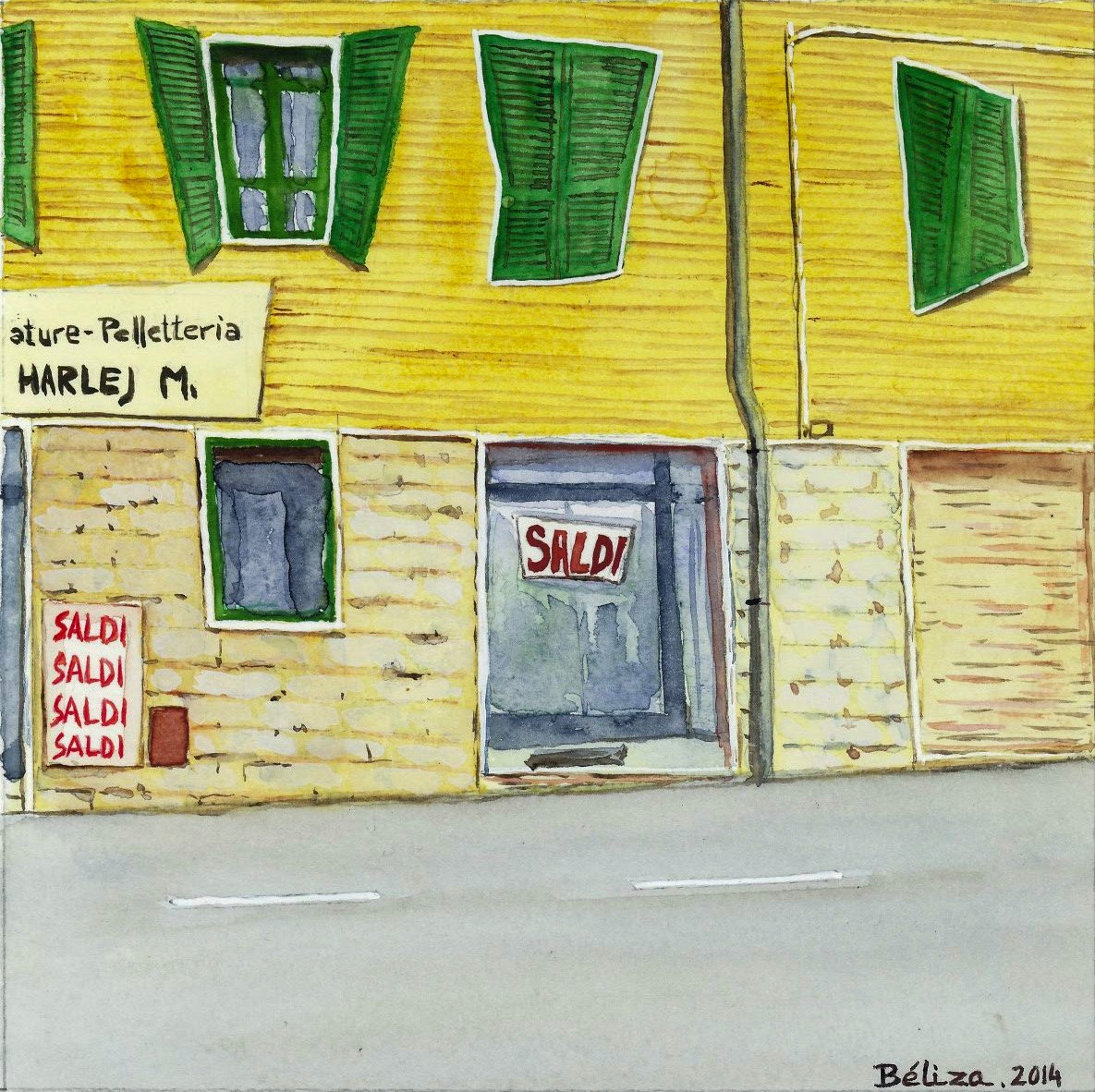 Yes, the windows are all crooked and deformed. For some obscure reason I just felt like they needed to be like this, haha.

I have seen some of the other finished squares and can't wait to see the finished result. It's going to be great!

The exhibition will be open during April and May, so if you get the chance go see it!
Posted by Unknown at 10:15:00 am 2 comments:

Email ThisBlogThis!Share to TwitterShare to FacebookShare to Pinterest
Labels: sketching workshop, this and that

On Thrusday we had another sunny lunch hour and sketching session.

This time we went to Place Guillaume II (or, as it is more commonly known, de Knuedler) and sat by the statue of de Renert (the fox).

This small statue (you barely see it if you are not paying attention), represents one of the most famous characters in Luxembourg literature.

De Renert is a fable written by Luxembourg author Michel Rodange and published in the XIXth century.

It is a satire on Luxembourg society of that period, a time when the nation was still very young and with an uncertain future in the industrial revolution.

It is a very beloved part of Luxembourg culture.

Dolphins and monkeys for the Sketching Workshop group

A rew months ago I joined a Facebook group called Sketching Workshop.

It's a community of 150 sketchers (Dunbar's number) who share their drawings and art tips and generally just get to know each other through their shared interest in sketching.

The group itself is divided into subgroups, each with its own topic and purpose: Albums & Chats, Details, Portraits, Tools, Games, Human Figure, Monthly Gig and Comics.

Last week it was my turn to contribute a panel to a series in SW Comics started in the beginning of the year, which was since named "Apollo Diner".

The idea of this activity is to make a comic as a cadavre exquis, each person continuing the story where the previous person left off.

Apollo Diner is a very surreal story, as it was inspired by a dream of one of the participants, who contributed the first two panels. Four people have since already added their crazy twist.

An Apollo rocket crashes in a city, which starts the rise of amoebe-shaped zeppelins and as a consequence the city starts getting deformed. Buildings start chewing on the zeppelins, and the cuts resulting from that are transformed into polite roasted chickens with legs and hats. Strange fruit starts growing from the ground and walk around with hats.

There is a scene in a diner (the Apollo Diner), where Amy is having drinks with a strange character (Apollo) who has a head that looks like plates with a greek mask. She falls in her drink into a strange world with an ananas dome, tetra milk buildings and strange creatures, until she lands on a spot called "right there".

From there she takes the Apollo airliner, a flying dolphin, which soars through the sky until she sees the "inverted island".

And this is where my panel fits in. 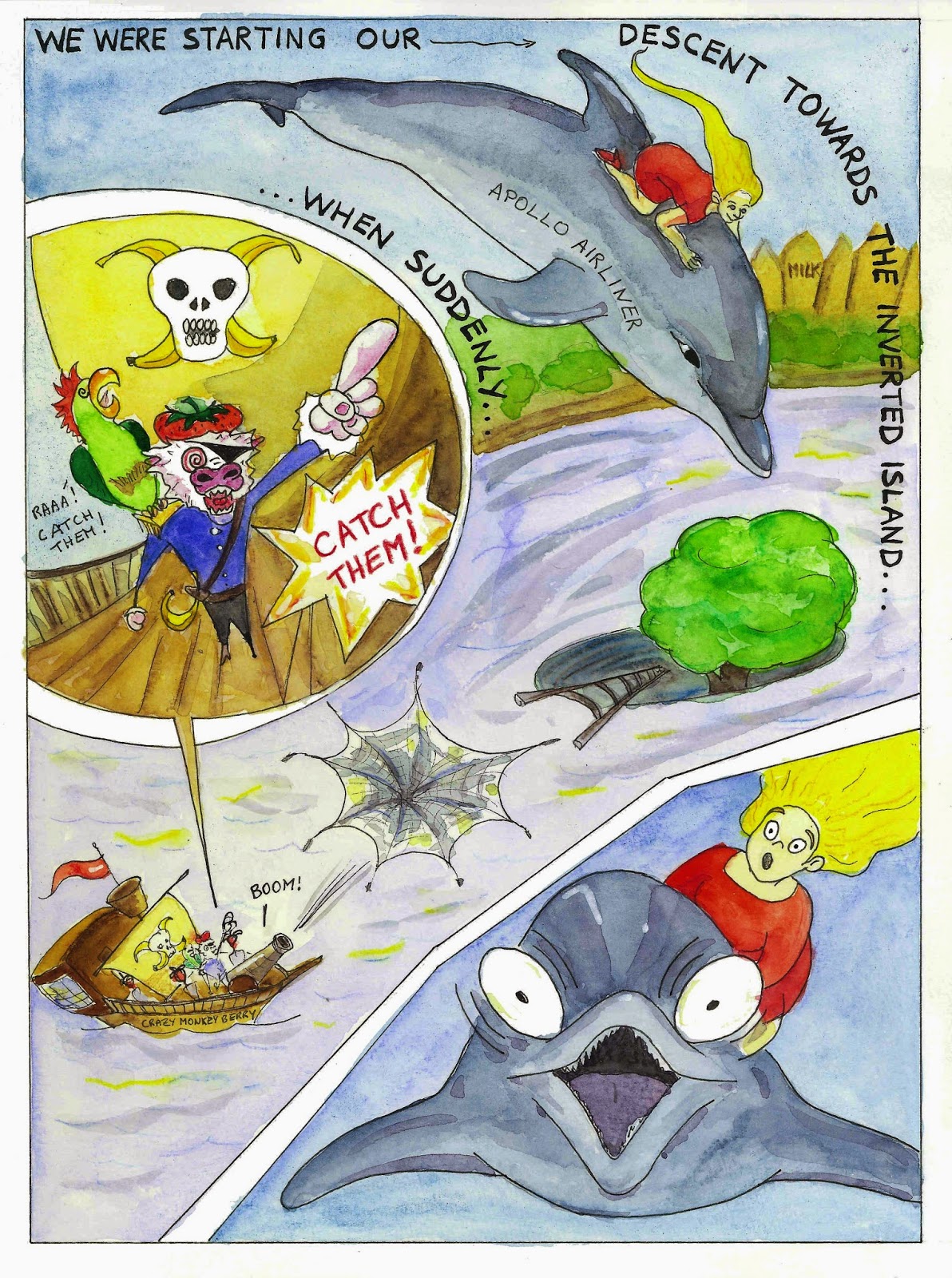 I'm curious to see what this is leading to. Can't be anything serious, which I'm loving!

I'll be posting more on the Sketching Workshop group from time to time.
Posted by Unknown at 3:45:00 pm No comments:

The sun is back!

Which means the weather is finally pleasant enough to go out sketching with my good friend Carole again.

She started sketching occasionally last year after a weekend together in Barcelona.

I was there for the USk Symposium and she came along to take a break from work.

Seeing so many avid sketchers around made her catch a bit of the virus herself.

We went on a few outings together since then and I'm loving her enthusiasm!

Now, after long grey and dreary months, we found an occasion to pick up the habit anew.

Here's the sketch I made during our lunch break at the Place du Théâtre not far from work.

Looking forward to more sketch lunches! :)
Posted by Unknown at 3:45:00 pm No comments:

This month's mail art exchange is organised by Atelier "Carnet à Spirale" again, and after teasing us with a few Amélie Poulain references to garden gnomes, the subject was revealed: les nains posteurs (posting dwarves ?).

The thing with this subject is that it can be seen as a pun on the word imposteur (impostor), so for a while I tried to come up with something original and witty... and failed miserably, haha.

So I decided to take the litteral route, which gave me this result:


This time, I didn't want to stick to the traditional illustration and tried some collage instead. Let's just hope that everything will stay safely stuck!

There's a slit in the paper as well, and when you open the letter, you can see an envelope inside.

Here is the back side.

The text is a reference to the name of the mail art exchange (Krok & Post).

Can't wait to get my nain posteur! :)

I found this little guy in my mailbox yesterday. He was sent by Emmanuelle Desachy and came straight from Savoie, France. 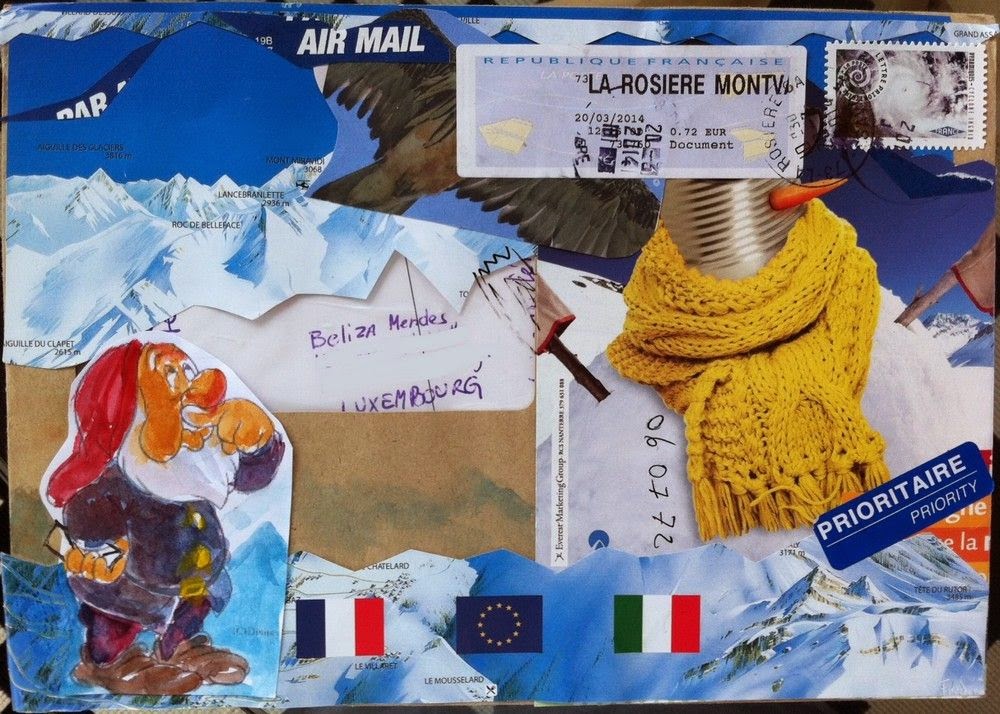 This month's location for the Virtual Paintout is Slovenia.

I went straight for Ljubljana, so I wouldn't get lost wandering through the country.

I wanted to try something different this time and I thought it would be fun to distort the buildings a bit.

It's not quite a fisheye effect - I don't master that at all - but I think it's still fun like this.

You can check out the reference image on Google Streetview.
Posted by Unknown at 8:30:00 am 2 comments: