This year I decided to get a museum pass, giving me free entrance to most of Luxembourg city's museums. Which means that: 1) I am more enclined to visit museums, and 2) I am more spontaneous about it.

Lately I have been to the Musée d'Histoire de la Ville de Luxembourg - MHVL (Museum of History of the City of Luxembourg) and Villa Vauban.

I love the MHVL. Not sure why. Maybe because of the building, maybe because its exhibitions are simple and without too much fuss.

The other day I went there for lunch at its cafeteria, AM 14, and took the opportunity to sketch part of the view that its beautiful terrasse offers, followed by a short visit of the permanent exhibition.

The statue of De Renert caught my eye, partly because of the beautiful lighting there. De Renert is a fox, a character of the most famous Luxemburg literary work written by Michel Rodange. There is another statue of the fox in Place Guillaume, a popular tourist visit.

There were Luxemburgish expressions written all over the walls, and part of De Renert as well. It seemed fitting to add them.

A couple of weeks ago I went to Villa Vauban with Leen for some sketching. The villa is named for the famous military architect who lived under Louis XIV. He contributed a lot, among other things, to strengthen Luxembourg's fortifications. You can see his work all over the city.

The museum has temporary exhibitions, mainly of classic artworks. It was my first visit to this place and I really liked the feel of it. The garden is particularly lovely and the rooms offer enough space for a good exhibition.

I was not very inspired that day. I tried to sketch the building, but not having any plan, just ended up doodling different things on the same spread.

The exhibition itself offered more interesting sketching material for that particular day. It showed artworks from William II's personal art collection. He was king of the Netherlands and Grand-duke of Luxembourg from 1840.

My favourite pieces were these here below: the one because of the collar and dramatic pose and the other because of the whole costume and, more importantly, the quote!

It would translate to something like: "Rather a cabin with my Guillaume, than suscribe to dishonour". It is so solemn and seeing it on the canvas seemed so out of place somehow, it was almost comic.

Museums are always good sketching territory!
Posted by Unknown at 9:30:00 am No comments:

I have been struggling with this post for several days now...

Last week, the sketching community lost one of its most charismatic members, Jorge Royan.

He was an engineer, photographer and sketcher from Argentina, but more importantly he was a visionary, a mentor and, above all, a good father.

He is the founder of the Sketching Workshop community I once mentioned, and its driving force.

From the first time I "spoke" to him via Facebook, when I applied to join the group, he struck me as someone a bit intimidating but kind, fun, open and very encouraging.

He was always striving to learn from others and teach what he knew. He always pushed people to be better and to reach their potential.

I don't remember how often he told me to "adjust the levels" of my drawings! I didn't even understand what levels were at the time. It was very humbling to have someone tell me that my sketches deserve better than a poor quality picture.

I feel fortunate to have know even just a little bit of him, exchanging ideas to improve the group, talking about our families. He was so fiercly proud of his family!

Although he was not exactly a close friend, I will miss him, I already do. He was a driving force for progress, the kind of person you don't meet often. I only regret that I didn't get to know him more.

His favourite quote, and the motto of Sketching Workshop, is "All that is not given is lost". I think that says a lot about him. 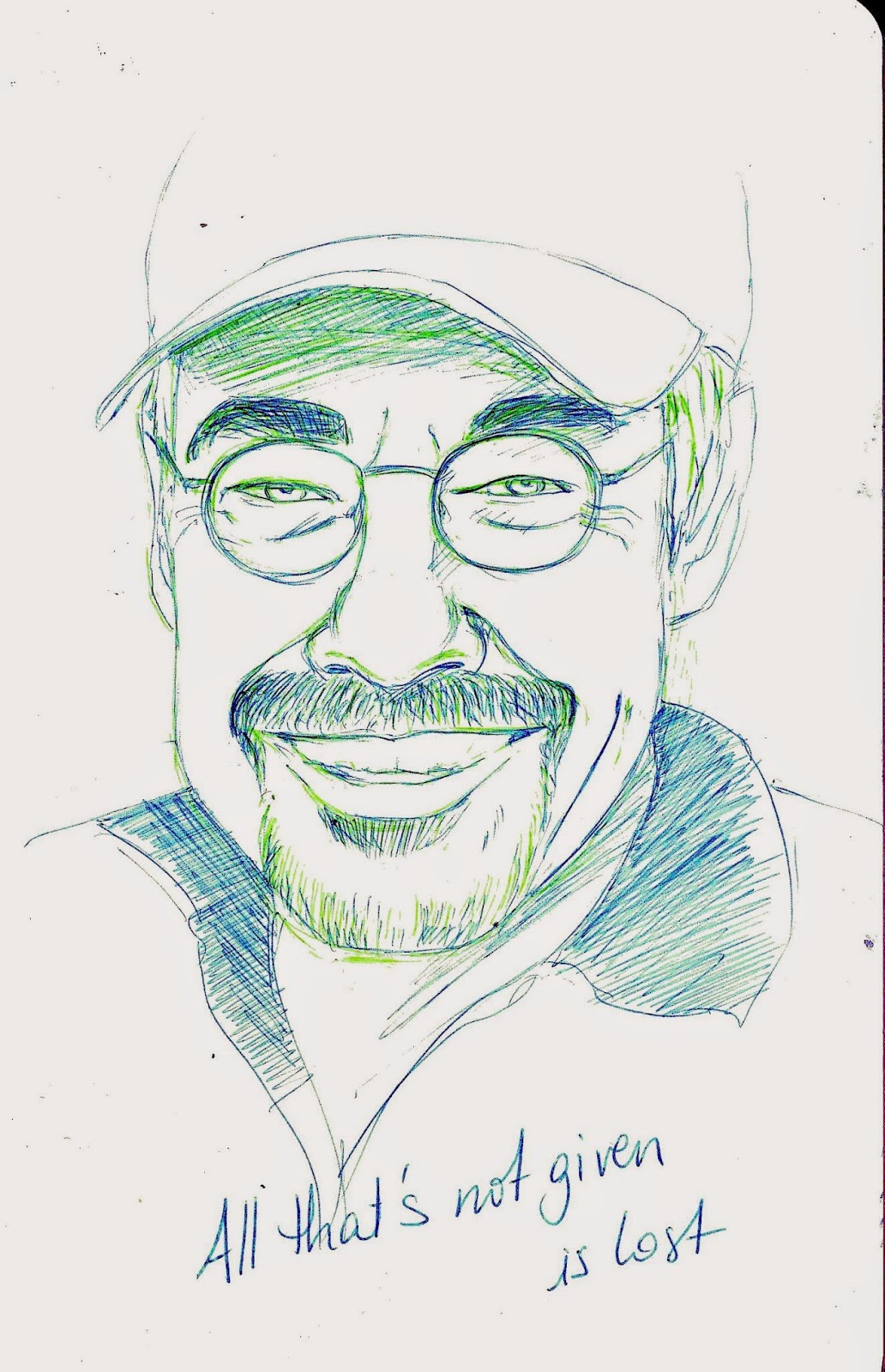 Now, after fiddling around so much with these stupid levels on this portrait, they still look off to me, depending on which screen I'm using! I'll do better, Jorge, I promise!
Posted by Unknown at 11:40:00 am No comments:

All about the ballpoint pens

This week I have been thinking a lot about ballpoint pens. All because of Andrea Joseph and her klass in Sketchbook Skool.

She does amazing things with simple pallpoint pens, which is a great reminder that you don't necessarily need fancy tools to make good art.

One of the assignments was to make a drawing of a collection we have at home.

Apart from stamps and comic books, I don't actively collect anything, but I remembered that I have gathered quite a few pens with two friends of mine over the years. We always bring each other a pen from the places we visit.

So here is a little peek at all the pens I have gathered so far. I don't always remember where each of them come from (unless it's written on them), but there are quite a few fun ones. I might add some text later on.

Andrea also showed us a fun calligraphy using just one line. Here are a few inspirational quotes I like. 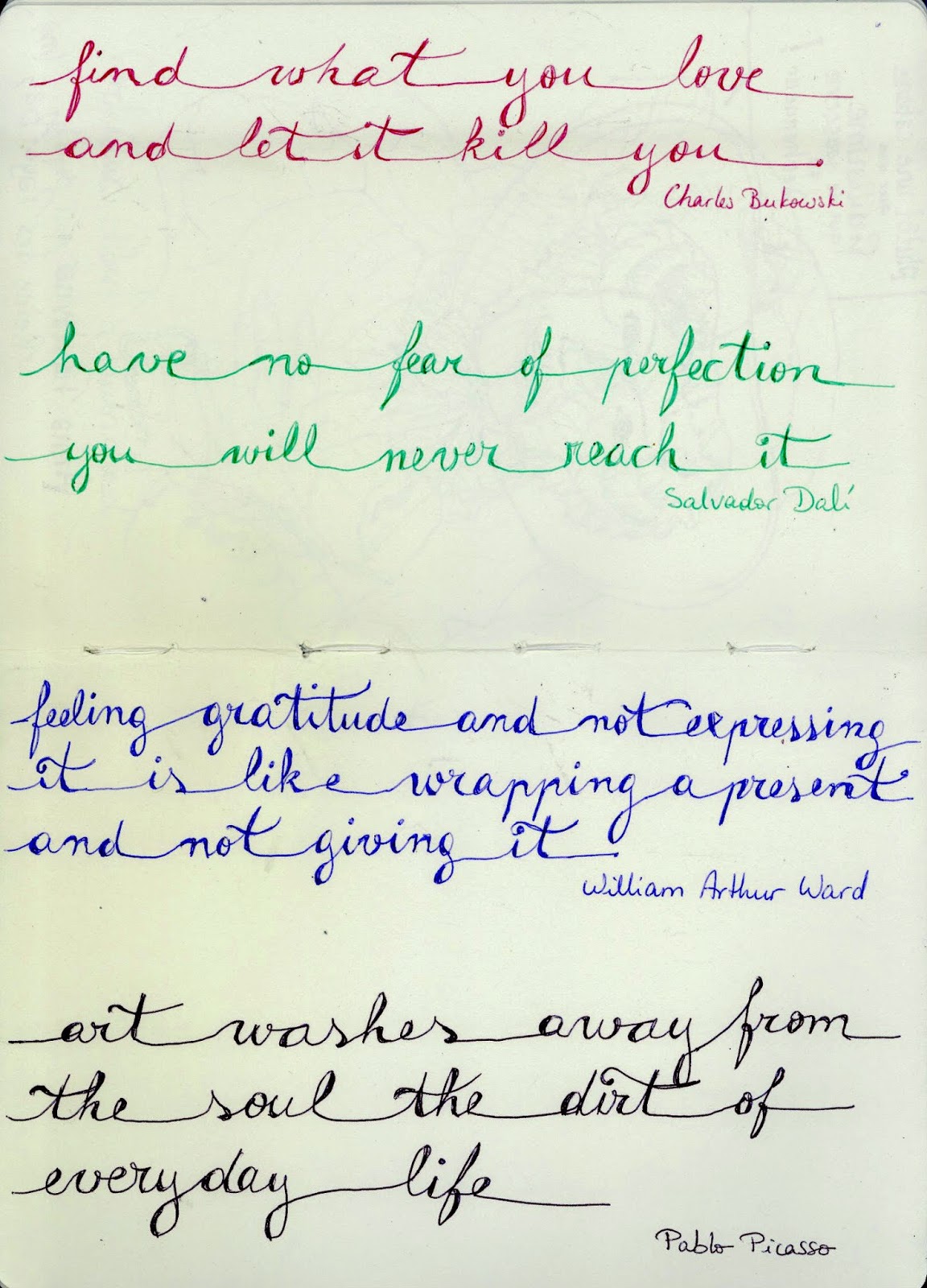 Do you ever happen to promise a friend you will make a drawing for them? I do. Quite frequently. The problem sometimes is keeping that promise.


On one hand you really want to give them one of your drawings and on the other you're not always satisfied with your work, so you don't want to give it to them. And where is inspiration when you need it?

A while back, I offered my friend Sari to make her portrait and a couple of weeks ago I finally sat down to do it.

This was not the first time I attempted to draw her, but this time I guess my muse was smiling on me, for I'm really happy with the result.

As with many portraits, the likeness is there but not 100 %. However, I do feel like I captured her spirit somehow and I'm very happy with the result. So was she when I showed it to her. She says I made her prettier than she is.

Now unto the next assignment!