I had the pleasure to spend my second day in New York with the local USk chapter. Marc Leibowitz had informed me that they were meeting for a sketchcrawl in Central Park at the statue of Hans Christian Andersen, where we would also enjoy some storytelling. 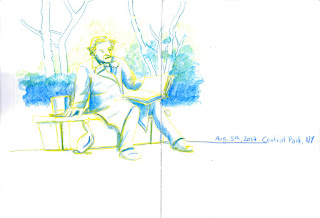 Since I was a little girl I have always loved stories, fairy tales and fables and the like, so this was a particular treat to me. The first storyteller was very energetic and expressive. Children and adults alike were engrossed in the stories. "Gallymanders! Gallymanders!" was something he kept saying. After some research I still don't know what it means, but it stayed with me. 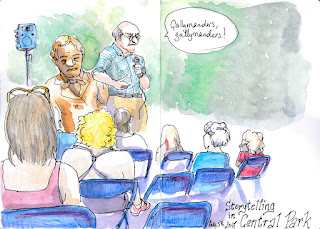 The rest of the day was spent peacefully and around that spot. It felt so good to just enjoy the park with like-minded people, so why move?

You could really feel it was Sunday and people hanging out around Conservatory Water were relaxed, some playing with model boats, others just chatting on a bench, having a drink, enjoying the sun. 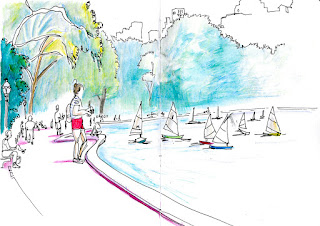 At the end of the afternoon Marc took us to a bar for a drink and draw session. I think we annoyed the servers because we were taking up so much space and putting tables together, but this being the US, a thankfully very customer-oriented culture, we got away with it. 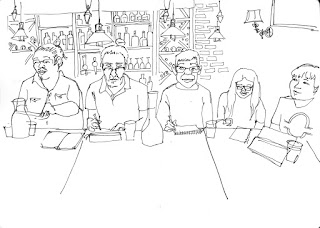 One of the participants was going back to the park later on for a tango lesson, so some of us joined her to continue sketching some more.

I spent the whole day thinking that Central Park has to be one of the most exciting parks in the world. There is something going on at almost every corner. Every time you think you've passed something amazing, something else comes along. For example, on our way to the tango session, we stumbled upon this group of people dancing on skates, showing off their skills to people cheering. There was a Motown vibe in the air. Apparently they come here pretty much every day. 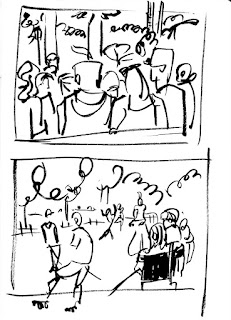 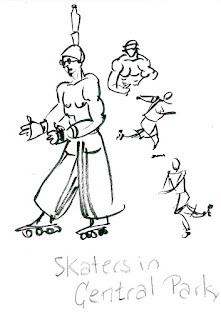 I knew I would love the tango session in the park and I was sorely tempted to participate in the free lesson. Had I not been on a sketching spree I probably would have. There was such a particular atmosphere watching people dance around the statue of Shakespeare, engrossed in the music. 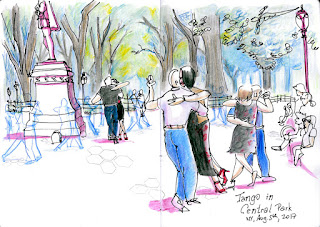 While I was sitting there I started a conversation with a German woman who had come to live in New York a long time ago (she didn't even have the slightest German accent anymore). She was very interested in my sketch, saying that she could never learn to draw. So I took pleasure in showing her that it was much easier than she thought. She seemed enthusiastic in the end and I like to think that I managed to encourage her to go out and sketch.