I had no idea what to expect of Boston. A friend of mine recommended the city to me, saying it had a very different feeling than New York or Chicago, more European and smaller in size. So I was quite curious.

As I'm a terrible tourist in that I don't much plan ahead what places to visit, on my first day I decided to follow the Freedom Trail, which leads through the most historic places linked to the American Revolution. I wanted to try and make a sketch at every one of the important sites.

The terrible tourist I am thought that the trail started at Paul Revere House. It was only when I actually found the red brick road that I understood that I was mistaken. No matter, the house was actually one of the sites I was most interested in, so I started there anyway and continued until I arrived at the USS Constitution.

Paul Revere House is the oldest remaining structure in downtown Boston and was Paul Revere's home at the time of his famous messenger ride in 1775. I really loved sketching this quaint little building, but knowing that trying to draw it in detail would not give me a satisfactory result, I focused mainly on shadows. 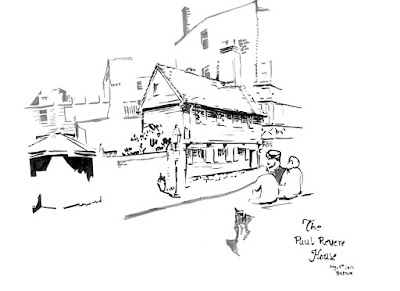 The next stop on the trail is Old North Church, from where the advancement of British troops was signaled to the American revolutionaries. 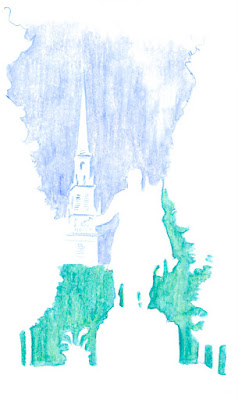 On my way to the next stop, Copp's Hill Burying Ground, I passed a small memorial to soldiers fallen during the war in Afghanistan, Iraq and ISIS. The collection of dog tags was a very moving sight which I couldn't help sketching before continuing on the trail. So many young lives lost... 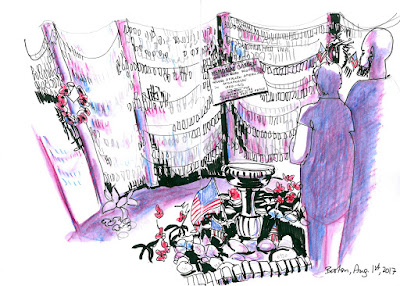 Copp's Hill Burying Ground is a cemetery dating back to the 17th century. So different from other burying grounds I have seen so far, I was very interested in the different sized head stones, how some were askew, as if marking some event that made them tilt this way and that. 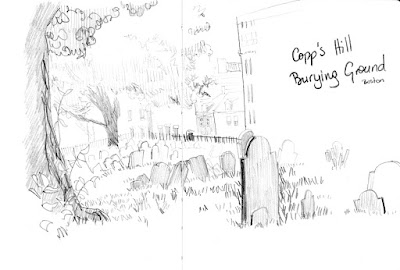 Next stop, Bunker Hill Monument, marking the place where the first major battle of the Revolutionary War took place in June 1775. 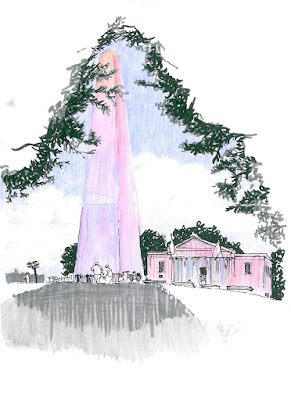 And finally, the USS Constitution or Old Ironsides as it is also called because cannonballs appeared to bounce off the warship during the historic battle with the HMS Guerriere. I love this nickname, how more bad ass can a ship get? 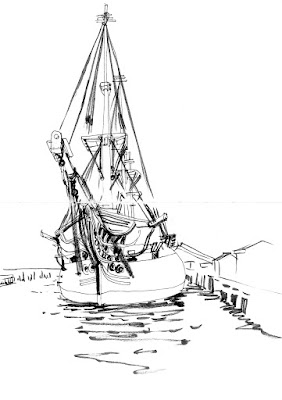 I highly recommend the Freedom Trail to any sketchers visiting Boston. It is a way to discover the city and an important part of the United States' history, and a way to give yourself a fun sketching challenge, too.

The rest of my trip to Boston was spent walking around Boston Public Garden, people watching and observing the swan boats passing by... 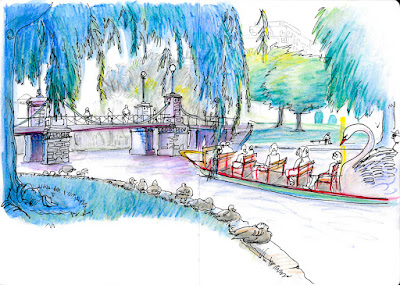 ... attempting to sketch some of the skyscrapers before being chased down by a downpour... 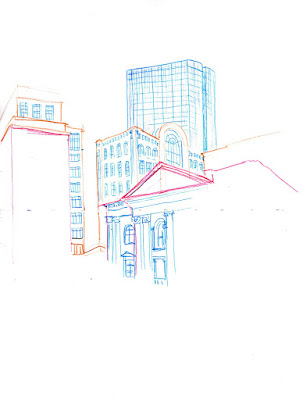 ... visiting Harvard campus, where I was enchanted by all the beautiful buildings and cute squirrels (must be amazing to study in such a place)... 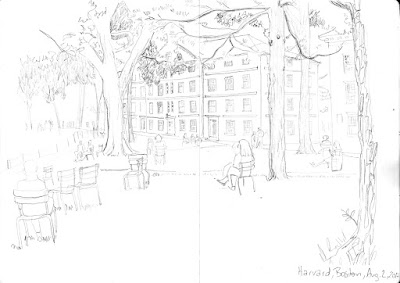 ... and doing some laundry before heading to New York next. 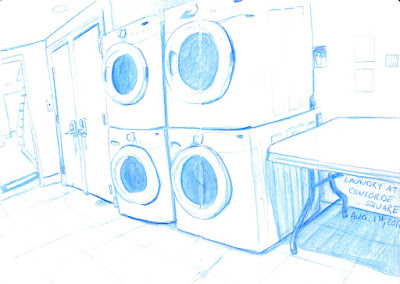